Posted by smitty at 7:32 PM No comments: 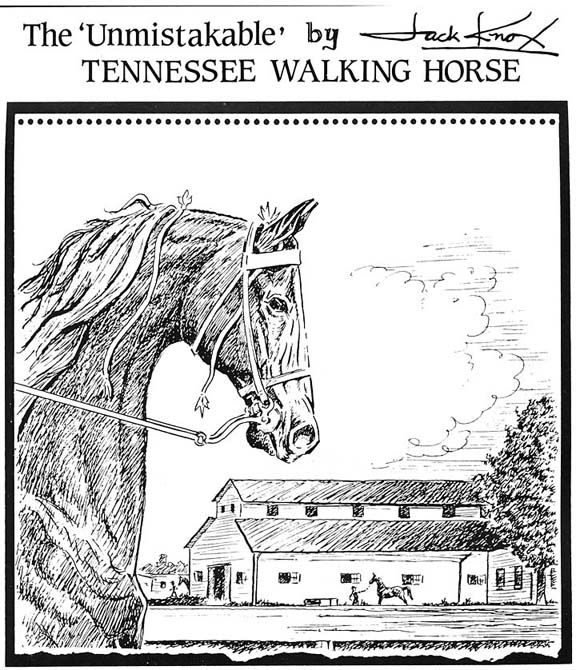 NOTE:  the following excerpts are taken from AMERICA'S TENNESSEE WALKING HORSE, published in 1973 by Jack Knox, a nationally know editorial cartoonist, who had a long and lasting interest in horses of all breeds.  For many years, he was a familiar figure at the Celebration, where many of his sketches of Tennessee Walking Horses were done. He spent much of his early life in the cowboy country of Texas and New Mexico and in later years, he took leave of his drawing board to spend vacations as a working cowboy. His studies of the Tennessee Walking Horse included both plantation pleasure and show horses.
The Unmistakable Tennessee Walking Horse
by Jack Knox

In size and color, in points of conformation, the Tennessee Walking Horse may bear a strong resemblance to several other light horse breeds.  But in gaits and stride, nodding his head with every step, the Walking Horse is unmistakable. And under saddle his free and easy way of going identifies the breed as clearly as the spotted rump identifies the Appaloosa. He is bred to execute three gaits in honest form: flat-foot walk, running walk and canter. His bold, long striding, head-nodding flat-foot walk is impressively swift and graceful. His running walk is an extremely fast and gliding version of the flat-foot walk: the cadence of step and nod is vastly accelerated -- quick-time to double-time -- and the length of stride is extended from two to six feet beyond the flat-foot walk stride.  His way of going in this gait, with bred-in tendency to nod and stride, has earned him recognition as a distinct breed. The running-walk has made him, as a breed, the highly favored saddle horse of pleasure horsemen, owner riders, on the bridle paths and back roads of America. As a show horse, elegantly styled and with spectacular speed, he has running-walked his way to top ranking popularity on the show ring circuits from the East Coast across the land to California. For years the fast racker of the five-faited American Saddle Horse breed was undisputed "King" of the show horse world. In the show ring, at the call, "Let 'em rack!" his high stepping speed brought and still brings a spontaneous burst of cheering from any horse show audience. Now, the modern Walking Horse, intensively trained for the show ring, displays such flashing high stepping speed at the running-walk that he appears to have equaled the speed and crowd appeal of the five-gaited horse. 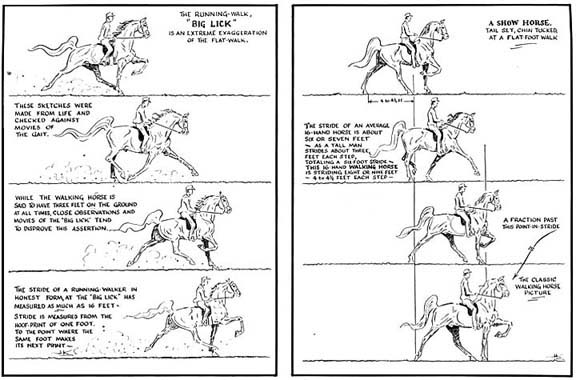 The plantation rider prefers a horse that strikes an easy, long-striding running-walk and holds to the gait without constant prompting. Such a horseman is a loose-rein rider, usually unmindful of his horse, for his business in the saddle is overseeing crops and field work, or timberland, or pasturage and cattle. In spite of motorization, the working saddle horse remains in use, to some extent, in the plantation and big farm areas of America. An Arkansas delta farmer explained his preference for a good saddle horse: "Driving a pickup or a jeep," he said, "I have to spend more time looking'  where I'm going than I spend lookin' at the things I need to see. A man can get a better view of things when he's horseback -- I can see a cow or cotton row better from the saddle. And when I'm not havin' to fight a steerin' wheel I have time to think. "I can tell you, too," he said, "that big bay Walkin' Horse of mine sure smoothes out the rough loggin' roads and tractor roads a fellow has to follow on his place. Give him his head and his running-walk is easy on both of us, good for all day. Every once in a while during a long day, we'll short-lope a mile or so; it's sort of like the 'seventh inning stretch' at a ball game. Then, too, when I've got worries and problems I just saddle up and air 'em out. Ridin' a spell will give refreshment to my mind."

It is practically impossible to set rigid rules for judging a Walking Horse show, However, there are definite guides and traditions, which, when followed closely, coordinate the opinions of the judges and well-informed members of the audience. Horse show audiences are moved by various motives, interest in a special horse, rider or owner; sometimes by the showmanship of a rider rather than the performance of the horse; sometimes in criticism of a rider's tactics, the crowd response will penalize a good horse.  But most horse show-goers have a real desire to be fair and cheer an apparently well judged class. Still, too many in the stands are not well enough informed on horses nor on the guides and traditions of judging. Often the most sportsmanlike crowd will join the applause of those personally interested, or "rail birds," whose purpose is to force, if possible, a decision in their behalf. A successful horse show is assured when the judge, the rider, the owner and the audience understand and observe the guides and traditions of the show ring. 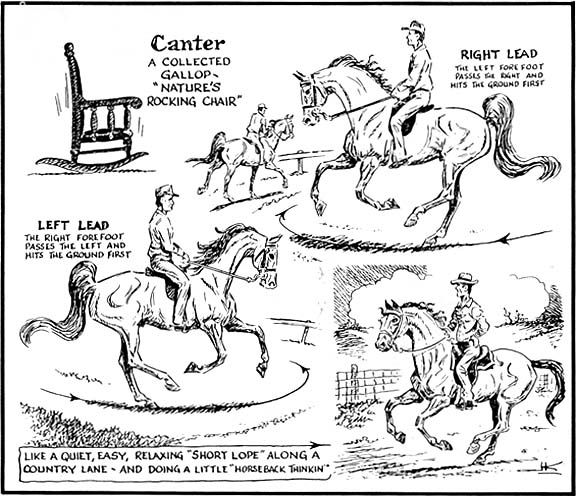 First, conformation.  Conformation, a "standard of perfection" recognized by tradition is the symmetrical proportions of all parts of the horse's body fitting gracefully into lines of beauty. Beauty in  horses is as difficult to standardize and define as the beauty of a lovely lady can be standardized and defined. However, beauty, according to tradition and "standards of perfection" in horseflesh, takes cognizance of the shape of the head, in size suitable to the horse. A bold, broad, unrounded forehead and brow, tapering to a narrow moth, firm lips and sensitive nostrils. The ears should be well up on the head, alert and moving, but generally pointing upward together and ahead. The size of the ears should conform to the size of the head. Eyes wide apart and brilliant, flashing with eagerness, rather than wild and glaring with impatience. Neck rising out of the chest and withers to the poll and jaw, trim and clean at the "throat latch". The withers should be prominent and thin, and the back short and straight from the base of the withers to the croup with very little space between the cantle of the saddle and the croup which should be almost level. The chest amply wide and muscular giving freedom and actions to the forelegs. Legs, with proportionately long and well muscled forearms; knees, clean; cannon bone flat, not round; ankles trim; springy pasterns; hoof enough to support the weight of the horse; forelegs straight, hind legs sufficiently "out of line" to the hocks, to give power and speed when needed; hocks trim, not meaty; well muscled hindquarters for drive. Tail rising from the end of the spine, on a nearly straight line from the base of the withers. 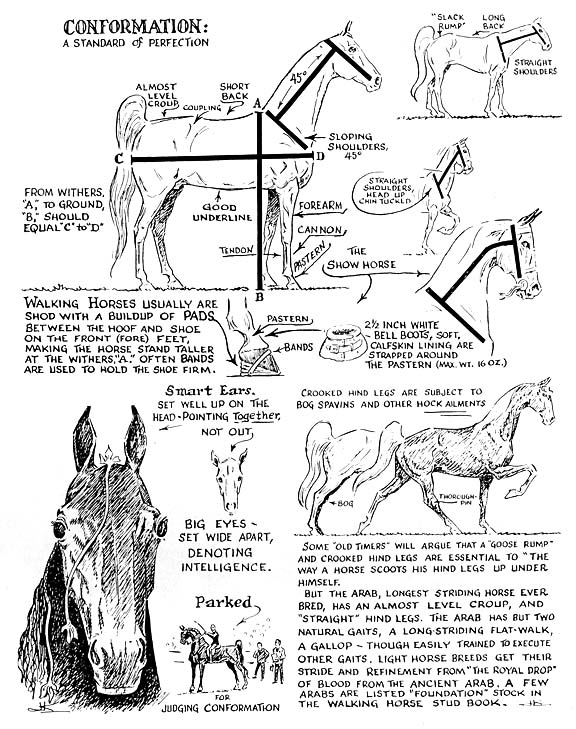 Next is form. Form is a horse's "way of going" and is extremely important. A beautiful horse with perfection conformation will appear to show poor conformation if his "way of going" is not in honest form in his flat-walk, running-walk and canter, or with an "artificial" touch in his gaits. 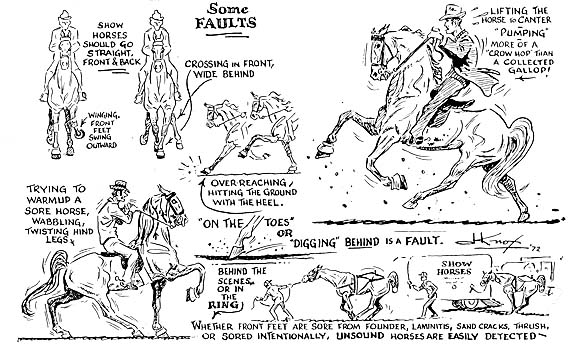 Posted by smitty at 2:12 PM No comments: