Product of the gentle South and famed for its "rocking chair" ride, the Tennessee Walking Horse is becoming one of the nation's favorite pleasure mounts, especially for amateur riders 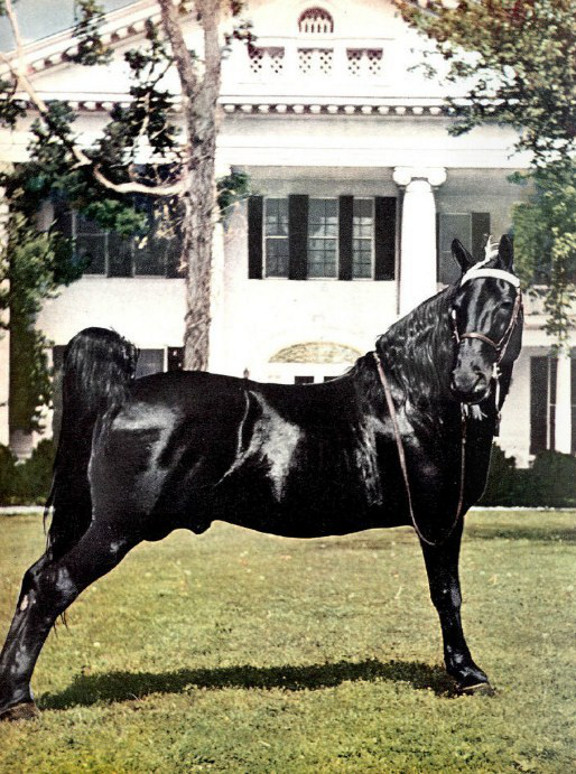 The Fabulous Midnight Sun, "Greatest Walking Horse in History", at home in Tennessee

The biggest Tennessee Walking Horse Celebration ever—with some 700 horses entered—takes place this week (Aug. 29-Sept. 3) at Shelbyville, Tenn. the heart of the Walking Horse country and world. Thousands of Walking Horse owners, breeders and exhibitors have jam-packed every hotel and rooming house for a 50-mile radius, and for the next week they will think, talk, sleep and buy nothing else. For to those who own and love Tennessee Walking Horses the annual Celebration is an institution, which although only 16 years old is as traditional as the breed itself.
The Walking Horse breed originated in middle Tennessee over 100 years ago as a result of farmers trying to produce a multipurpose animal—one which was strong enough to pull the plow, docile enough for the kids to ride to school and yet smart enough to hitch up to the buggy on Sundays.
By crossbreeding the Thoroughbred with the sturdy stock of saddle horses brought across the mountains by Virginians in early pioneer days and adding characteristics of the pacer and the Morgan, farmers produced an animal which combined sufficient qualities from each to mark it as a distinct and individual breed. Short in the back with a deep body and a long, graceful neck in the perfect specimen, its most distinctive quality was a running gait peculiar to that breed only. This gait—a diagonally opposed foot movement—started with an ordinary flat-footed walk but as the speed increased the hind feet overstepped the front hooves by many inches. This unusually long stride by the hind legs coupled with the short stepping front action gave a "gliding" sensation to the rider which was immediately sought after by plantation overseers and farmers who had to spend long days in the saddle.
The horse could go in a relaxed and steady manner over soft ground not only at the flat-footed walk and running walk, but also at the canter. Even at this gait the Walking Horse offered unusual smoothness in the saddle, having such a rolling, non-jarring motion that its canter came to be called the "rocking chair ride." 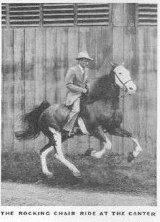 Before long Plantation Walkers, as they had come to be called, were eagerly sought after through the whole South.
In the years that followed the Civil War, Walkers earned a reputation as easy-riding mounts, which has since culminated in their being called "World's Greatest Pleasure Horse." It wasn't until many years later, however, that any organization of the breed took place. Then, in 1935, several prominent owners of Walkers banded together to protect the horse's bloodline and formed the Tennessee Walking Horse Breeders' Association. Even so, the U.S. Government did not officially recognize Walking Horses as a separate and distinct breed of light horse until 1949.
Today, there are some 40,000 registered Walking Horses—plus three times that number unregistered. Because they are easy to ride and do not require the equestrian skill demanded by other breeds, Walkers have become very popular as mounts for children and older people and have secured for themselves a permanent place on the American saddle horse scene.
Every year since 1939 the National Celebration at Shelbyville has provided the climax to the Walker year when it crowns the "World's Grand Champion Walking Horse."
Unfortunately, because of a rift which split the Walking Horse ranks wide open, there are currently two horses which claim the title "World's Grand Champion Walking Horse." One is last year's Celebration winner, White Star. The other is a gelding named Sun's Big Shot which—because the Tennessee Walking Horse Breeders' Association does not endorse the Celebration any more and crowns its own world champion at its own sponsored show a month later—is officially and sonorously titled "The Only Tennessee Walking Horse Breeders' Association of America-recognized World's Champion.

For three years now the Breeders' Association has been unable to see eye to eye with the way non-horse-owning professional promoters have run the Celebration. But confusing as it may be to have two world's champions in the same sport, the Walking Horse fraternity has come to accept the oddity as just another part of its split personality.
Before the mid-40s all was tranquil, and the Breeders' Association happily endorsed the Celebration, even putting up $7,500 of the prize money. But differences between the groups began soon after a magnificent stallion called Midnight Sun (see color page) skyrocketed to the top in the Walking Horse show world. Owned by Harlinsdale Farms, Franklin, Tenn. this horse was so phenomenal that he virtually eliminated competition and crowned his show career by winning the world championship twice, in 1945 and 1946. Retired to stud, Midnight Sun, by now acclaimed the greatest Walking Horse in history, was developed into an even more successful business operation. By artificial insemination He was able to service at least 10 mares each time he stood at stud. At a fee of $100 for each mare serviced, Midnight Sun, it is claimed, was annually earning between $75,000 and $100,000 for owners Wirt and Alex Harlin.
The result of Midnight Sun's widespread mass breeding was to give him a monopoly on the whole Walking Horse breeding business. While this virtually killed off the breeding chances of many other good stallions, its most dangerous aspect was that little else but Midnight Sun colts were being foaled. These were becoming automatic winners in the show ring—particularly automatic, claimed the Breeders' Association, at the Celebration—and when Midnight Merry, a horse which was not thought too highly of by many experts, won the world's championship title in 1949 it proved to be the straw that broke the Breeders' Association's back.
Firmly believing that many of the Celebration judges were favoring Midnight Sun horses, the Association asked for a voice in selecting the Celebration judges. But the two groups were never able to get together on a system of selecting judges which was acceptable to both, and in 1952 the Breeders' Association withdrew its endorsement of the Celebration, plus the $7,500, and announced it would stage its own show and choose its own world's champion. Then the Association broke Midnight Sun's monopoly by outlawing artificial insemination at its next meeting. This was only achieved when John H. Amos, a coal mine owner and member of the judge's committee, brought to the meeting 86 of his coal miners with full paid membership—and, of course, the right to vote.
Although no longer able to breed by artificial insemination, Midnight Sun continued to stand at stud, but his fee jumped from $100 to $200.
In spite of the lack of endorsement from the Breeders' Association the Celebration went on to bigger and better shows. Whatever the whispered suspicions, gossip and jealousies that surround its success, it remains a fact that in the minds of Walking Horse enthusiasts there is but one grand world Celebration for their breed and Shelbyville is it. The majority of Walker fans are content to have their cake and eat it too—by endorsing the Breeders' Association's policies, but attending the Celebration too. Even six of the nine members of the Breeders' Association executive committee have horses entered in this year's Celebration.
Since breaking away from the Celebration, the Breeders' Association, under the fearless leadership of its President S. H. (Wacky) Arnolt of racing-car fame, has steadfastly gone about its business of fostering and furthering an even greater future for the Walking Horse. Mostly men of adequate means, they are sincerely dedicated to the preservation of the breed from any and all injurious exploitation and monopoly. Fortunately, the sport of showing and owning Walkers is far bigger than the differences existing among its supporters.
Though the slick American Saddle Horse set tends to regard Walkers with the same intolerance a ballerina choosing dancing shoes might have for a pair of well-worn sneakers, there is no getting away from the fact that for honest-to-goodness pleasure and comfort, there is nothing finer. A sound, well-trained Walker, good enough as a children's pet or for old people, can be bought for $100 up, but good show stock can begin in the thousands.
While most owners of Walkers are people of moderate income, there are celebrities aplenty among them. Gene Autry's famous horse, Champion Jr., is a Walker, and many other prominent people have owned them including Paul Whiteman, Arthur Godfrey and Mrs. Eleanor Roosevelt.
More and more, as American life pushes outward toward suburbs and country living, the pleasure horse is returning as an unequalled form of recreation and exercise. With its characteristic bobbing head, high-stepping front action and long, deep-striding hing legs, the Tennessee Walking Horse is being seen on trails across the nation, far from its native Tennessee—but still as southern as hush-puppies, catfish and black-eyed peas.

Posted by smitty at 9:01 PM No comments: 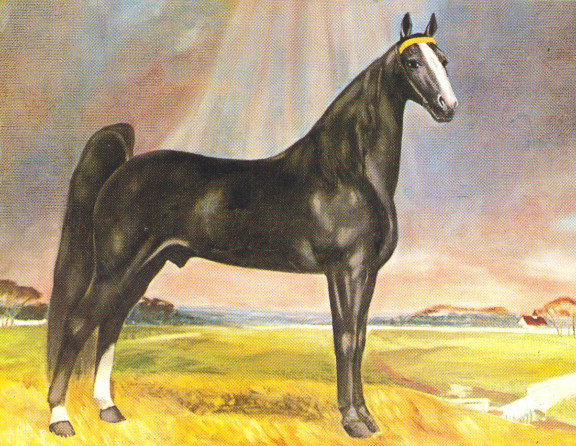 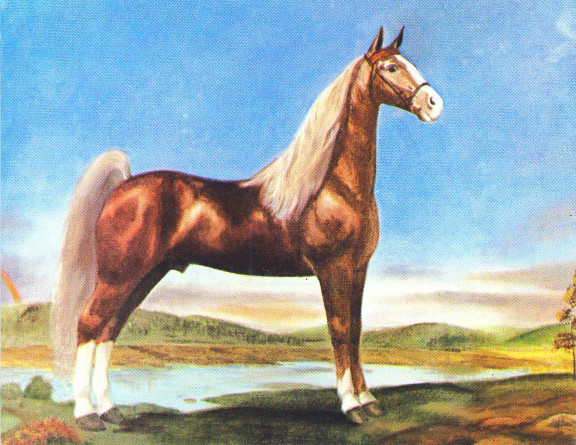 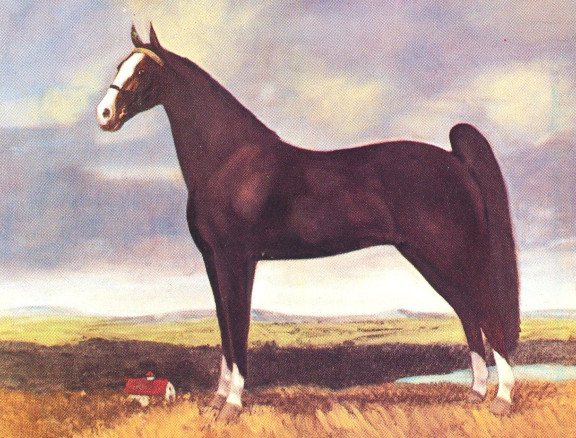 Posted by smitty at 7:26 PM No comments: