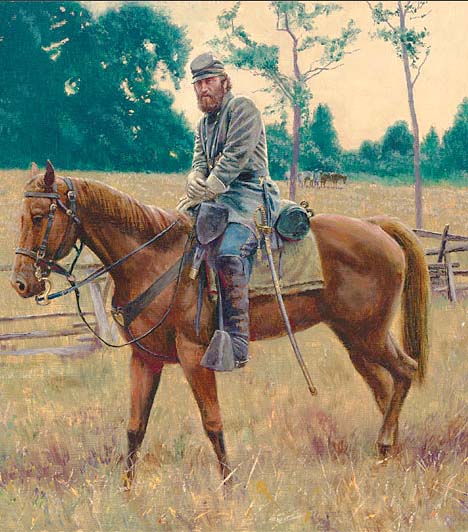 Excerpt from the article "Walker....Horse Born of War" by Aletha H. Weihl
The Spokeman-Review, 1965

A horse  born of chaos, through years of careful selective breeding has developed into the beautiful Tennessee Walking Horse of today. A highlight of the show ring. The popularity of this breed has spread in the last few years.
The Tennessee Walking Horse as a breed, is just about 100 years old. In August, 1960, at the Shelbyville 22cd Annual Tennessee Walking Horse Celebration, Tennessee Governor Buford Ellington proclaimed 1961 as the Centennial Year for the Tennessee Walking Horse. Federal recognition of the breed was made in 1950. The foundation for the breed was laid when the last gun had been fired, and the last bugle had  sounded on the battlefields of the Civil War.
The Confederate soldier usually had a horse known for his easy ride and fast pace. These "Tennessee Pacers" had emerged from the Canadian Pacers, the Narragansett, with some Thoroughbred, Morgan and American Saddler strains. These were not the fine horses we see today, but a general utility horse, a good all-around farm horse used by the early settlers in Tennessee, Virginia, Kentucky, and North Carolina.
The Union soldier was often mounted on a rough riding Trotter, of sturdy build, but possessing great speed. Some of the Union men rode Morgans. After the war, the merging of these two strains of horses in the Middle Tennessee blue grass region brought about the horse with the distinct characteristic that is known to no other breed. He has the natural gait no man has been able to duplicate by training or any artificial means. This is the "running walk", a smooth, gliding, overstepping, four-cornered gait, "born in" the Walker. The horse has tremendous stride and head motion in this gait, yet the rider remains so motionless he could balance a book on his head without difficulty while the horse "goes on" in his running walk.  The Walker also has a good, smooth, fast flat walk and a "rocking chair" canter, straight on both leads, with a high rolling motion.
Records were not kept in those days, so it is difficult to know when this distinct gait first appeared, but the first on record attributes the gait to Bald Stockings, a horse foaled in kentucky in 1837 of American Saddler and Thoroughbred breeding.  Other horses in the South showed characteristics of this gait. Some of these were true heroes of the conflict between the states.
Forefather of many war horses in Middle Tennessee was "McMeen's Traveler", foaled in 1849. He is described as a real red sorrel, with one white ankle behind, 15 hands one inch high, and very muscular. He was frequently mistaken for a Throughbred until he moved, then his perfect saddle gaits distinguished him. Fifty seven of his sons and daughters served as mounts in General Nathan Bedford Forrest's cavalry.
Although not listed as one of the official Foundation Sires of the Tennessee Walking Horse, a stallion named Grey John was the sire of Buford L. F-11 and grandsire of Bramlett F-9, among the first elected Foundation Sires when a Tennessee walking Horse Registry was begun in 1935. Grey John himself missed the Registry, no doubt because neither his dam or his sire were known.
In 1863, a squad of Union solders left a fine mare, so heavy with foal she could not keep up at Captain Boone's, a Confederate away at war. They took a young horse and went on. In less than a month, she dropped a foal, a colt. A Negro boy made the discovery one morning and came running to the house with the news that the old mare had "a blue 'possum or somethin' in the stall with her." "His ears stick straight up and his legs sticks in every which way. What must I do wit it?" Mrs. Boone advised the boy to leave it alone and when captain Boone came home he'd advbise them as to "what to do with it."
When Captain Boone came home on furlough and saw "the blue 'possum'," he advised the to "just leave it alone, and we'll see what kind of horse a blank Yankee colt will make," adding a few succulent adjectives. The colt began to shed and grew lighter in color and was named Grey John. He grew into the "walkingest, reachy, springy saddlehorse" you could ever hope to see. Captain Boone said it took John just an hour to flatfoot walk the 8 miles from Fayetteville to Booneville. He stayed at Booneville until he was 23 years old, and mares were brought from far and wide. Travel was not easy in those days, but this was horse-lover country, and Grey John was the kind of horse every one wanted in his own pasture.
And, that is the secret of the widespreading success of the Walker right down to the present day. Besides the unique gait, no other horse can boast such versatility. He has proved his worth in peace and war.
Posted by smitty at 11:24 AM No comments: