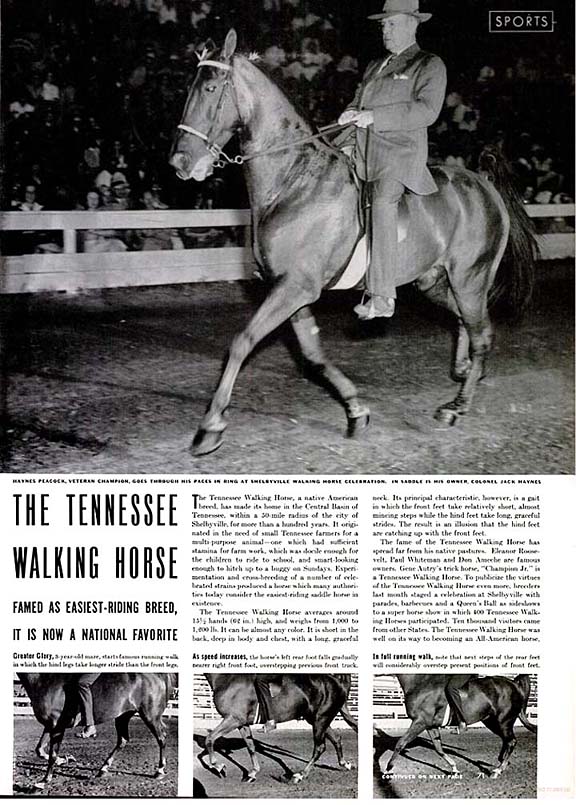 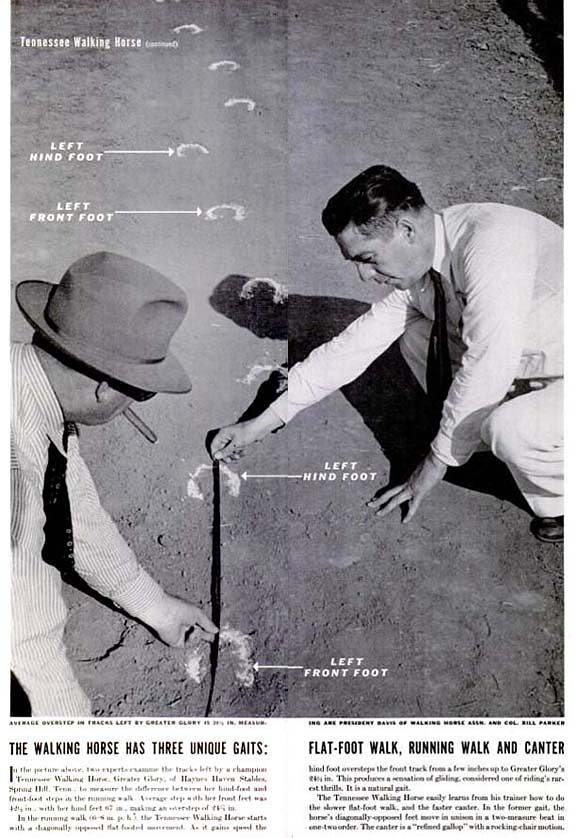 The Tennessee Walking Horse, a native American breed, has made its home in the Central Basin of Tennessee, within a 50-mile radius of the city of Shelbyville, for more than a hundred years. It originated in the need of small Tennessee farmers for a multi-purpose animal---one which had sufficient stamina for farm work, which was docile enough for the children to ride to school, and smart-looking enough to hitch up to a buggy on Sundays. Experimentation and cross-breeding of a number of celebrated strains produced a horse which many authorities today consider the easiest-riding saddle horse in existence.
The Tennessee Walking Horse averages around 15 1/2 hands (62 inches) high, and weighs from 1,000 to 1,200 lb.  It can be almost any color. It is short in the back, deep in body and chest, with a long graceful neck. Its principal characteristic, however, is a gait in which the front feet take relatively short, almost mincing steps while the hind feet take long, graceful strides. The result is an illusion that the hind feet are catching up with the front feet.
The fame of the Tennessee Walking Horse has spread far from his native pastures. Eleanor Roosevelt, Paul Whiteman and Don Ameche are famous owners. Gene Autry's trick horse, "Champion Jr." is a Tennessee Walking Horse. To publicize the virtues of the Tennessee Walking Horse even more, breeders last month staged a celebration at Shelbyville with parades, barbecues and a Queen's Ball as sideshows to a super horse show in which 400 Tennessee Walking Horses participated. Ten thousand visitors came from other States. The Tennessee Walking Horse was well on its way to becoming an All-American horse.
In the picture above, two experts examine the tracks left by a champion Tennessee Walking Horse, Greater Glory of Hayne's Haven Stables, Spring Hill, Tenn., to measure the difference between her hind-foot and front-foot steps in the running walk. Average step with her front feet was 42 1/2 in., with her hind feet 67 in., making an overstep of 24 1/2 in.
In the running walk (6-8 m.p.h.) the Tennessee Walking Horse starts with a diagonally opposed flat-footed movement.  As it gains speed the hind foot oversteps the front track from a few inches up to Greater Glory's 24 1/2 in.  This produces a sensation of gliding, considered one of riding's rarest thrills. It is a natural gait.
The Tennessee Walking Horse easily learns from his trainer how to do the slower flat-foot walk, and the faster canter. In the former gait, the horse's diagonally-opposed feet move in unison in a two-measure beat in one-two order. The canter is a "refined gallop" with a rocking-chair motion.
Posted by smitty at 9:13 AM No comments: 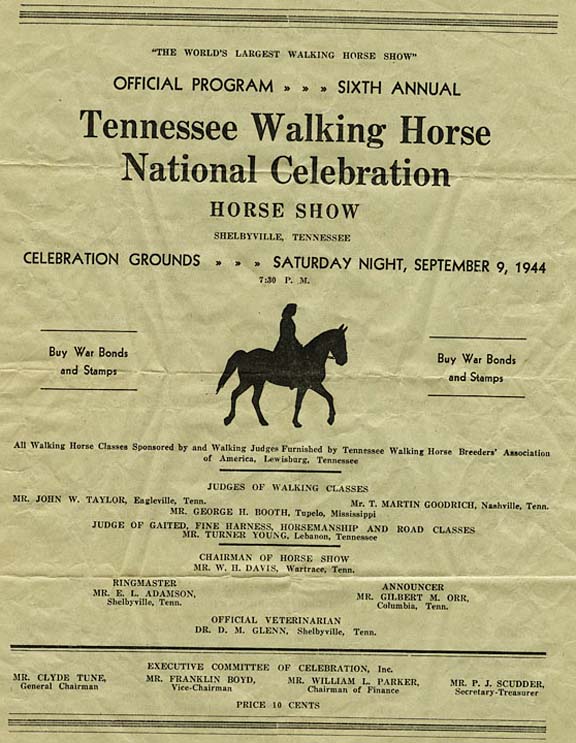 Posted by smitty at 9:02 AM No comments: